The EU Blockchain Observatory and Forum (EUBOF) has just published a detailed report on the current state of the European blockchain ecosystem. The report analyzes the current status on both the adoption and the regulatory treatment of blockchain and crypto assets in the 27 EU member states, plus United Kingdom (UK) and Switzerland.

An individual factsheet is presented for each country, culminating in an assessment of the regulatory and ecosystem maturity level for all of them (see figure). 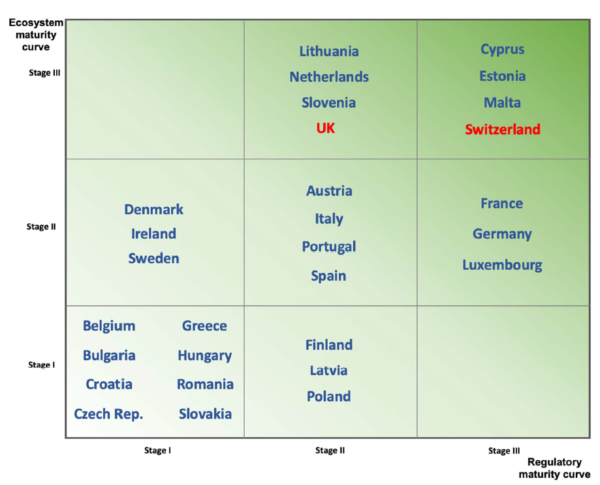 The report finds four countries at the highest maturity level on both dimensions:

The report has been published by the EU Blockchain Observatory and Forum, coordinated by the Institute For the Future (IFF) of the University of Nicosia. Professor George Giaglis, IFF’s Executive Director stated: “We are proud to have worked with the European Commission and our partners at the EU Blockchain Observatory to publish this report. As Europe is preparing to harmonize the regulatory and policy frameworks of the EU member states, with the Markets in Crypto Assets (MiCA) proposal that was published in September, it is important to understand where each country in Europe currently stands. We have interviewed dozens of experts in all European countries and collected evidence on regulatory initiatives, status of the entrepreneurial ecosystem, education initiatives and communities of practice in each country. We believe the result to be the most comprehensive and up to date analysis of the state of the European blockchain ecosystem to date”.

Read the fll report here
The EU Blockchain Observatory and Forum is a European Commission initiative to accelerate blockchain innovation and the development of the blockchain ecosystem within the EU and so help cement Europe’s position as a global leader in this transformative new technology.

The Institute For the Future is an interdisciplinary research Centre at the University of Nicosia (UNIC), aimed at advancing emerging technologies and contributing to their effective application in industry, government and education as well as evaluating their impact on employment, wealth inequality and our lives and societies in general.

University of Nicosia is the largest university in Cyprus and among the largest English language universities in southern Europe, with over 12,000 students from over 70 countries across the globe, coming together in an innovative and transformative learning space.